COOPERATION WITH THE PARLIAMENT OF THE REPUBLIC OF MACEDONIA

Primary beneficiaries of the results of SAO operation are the Parliament of RM, the Government of RM and other competent public sector institutions.

SAO duty is to communicate timely information to the beneficiaries of the results of SAO operation.

The communication with the Parliament is regarded as particularly important because SAO is organized under the Westminster model of Supreme Audit Institution and reports on its operation to the Parliament.

SAO Mission as defined in the Development Strategy is to provide objective and timely information to the competent state bodies and the public on the findings from conducted audits. In addition, SAO aims at providing support to the Parliament in fulfilling its responsibilities through identification and presentation of irregularities, cases of illegal operation, and suspected cases of corruption and abuse of office.
The continuous cooperation between SAO and the Parliament is carried out in several directions as prescribed by the State Audit Law:

COOPERATION WITH THE GOVERNMENT OF THE REPUBLIC OF MACEDONIA

COOPERATION WITH THE MINISTRY OF FINANCE

The State Audit Office is obliged to submit to the Ministry of Finance every audit report that includes findings in the field of finance.

Under the Protocol for Cooperation signed on 20 October 2006, the State Audit Office and the Ministry of Finance cooperate on issues regarding the system for financial management and control, internal audit in the public sector and state audit, for the purpose of successful accomplishment of their functions in strengthening management and control of public funds and providing high level of competence of both institutions in carrying out audits.

COOPERATION WITH INSTITUTIONS COMPETENT FOR INITIATING PROCEEDINGS BASED ON AUDIT REPORTS

In line with Article 35 of the State Audit Law, should the authorized state auditor in the course of audit assess that the auditee made a violation or a criminal act, he/she is obliged to inform the competent authorities immediately.

The following bodies are competent for initiating proceedings based on the audit reports: State Commission for Prevention of Corruption, the Public Prosecution Office of the Republic of Macedonia and the Ministry of Interior.

In the frames of the cooperation with these bodies, SAO regularly:

The State Audit Office actively cooperates with all relevant authorities for preventing and reducing corruption and conflict of interest. SAO is a signatory of the Protocol for cooperation for the prevention and repression of corruption and conflict of interests, signed on 25 December 2007 between the State Commission for Prevention of Corruption, the Public Revenue Office, the Public Prosecution Office of the Republic of Macedonia, the Ombudsman of the Republic of Macedonia, the Judicial Council of the Republic of Macedonia, the Ministry of Interior, the State Audit Office, the Customs Administration,  the Financial Police, the Directorate for Money Laundering Prevention and the State Bureau for Geodetic Operations.
In this context the State Audit Office participated in the preparation of the National Programme for prevention and repression of corruption and the National Programme for prevention and reduction of conflict of interest for the period 2011 – 2015. SAO representative also participates in the work of the Inter-ministerial body for prevention of corruption.
In addition, the State Audit Office participates in the realization of the National Programme for the Adoption of the Acquis through the activities envisaged in Chapter 3.23 Judiciary and fundamental rights, Area: Anti-corruption Policy, and Chapter 3.32 Financial Control, Area: External Audit.

COOPERATION WITH THE AUDIT AUTHORITY

During October 2011, the State Audit Office signed a Memorandum for Cooperation with the Audit Authority for auditing the instrument for pre-accession assistance (IPA).

The Memorandum defines the cooperation between both institutions in terms of data exchange, technical assistance, realization of joint trainings, etc.

The State Audit Office cooperates with the international organizations of supreme audit institutions (SAIs) and other national SAIs on issues related to state auditing.

This cooperation aims at:

Since 2005 SAO is an active member of the Network of EU candidate and potential candidate countries and the European Court of Auditors in Luxembourg. SAO has also established cooperation with the European Court of Auditors based on the internship program for junior auditors of SAIs of EU candidate countries.
SAO has developed and maintained bilateral and multilateral cooperation within INTOSAI and EUROSAI community. The cooperation has resulted in several completed and ongoing projects.

The World Bank Project for development of SAO was realized in the period 2003-2005. The Project achieved outstanding results in terms of organizing and delivering training courses for SAO staff, preparing manuals and guidelines for further harmonization of SAO operation with international standards. In addition, performance audit manual was prepared and study visits were organized for SAO employees.

In December 2008 ended the three-year twinning project with the colleagues from the Netherlands Court of Audit (NCA) financed through the Official Development Assistance (ODA) of the Netherlands, whose focus was improvement of SAO legal framework, building SAO organizational and administrative capacity, development of auditors’ skills and IT and IT audit, in line with NCA best practice and experience.

In the frames of the second component of the abovementioned project and on SAO request, the SAI of Germany (Bundesrechnungshof) conducted a Peer Review. This Peer Review provided independent and professional opinion on SAO progress and served as a basis for continuation of SAO efforts to become modern, independent and effective SAI.

The exchange of good practice with NCA continued in 2009-2010 through the MATRA Pre- Accession Project for further development of SAO operation.

There is an ongoing implementation of a new collaborative project with the Netherlands Court of Audit, which commenced its activities in the first half of 2012. The project aims at establishing sustainable and effective professional relationships between SAO and the Parliament of the Republic of Macedonia. The project includes several activities, including preparation of a manual with practical tips for using audit reports intended for MPs, organizing workshop for MPs for the application of the aforementioned manual and presentation of good practices of other SAIs in relation to the cooperation with the Parliament.

The cooperation with SIGMA and the European Commission proceeds in the frames of the annual assessment missions for financial control in the Republic of Macedonia. 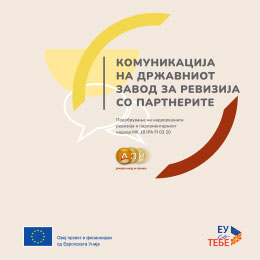